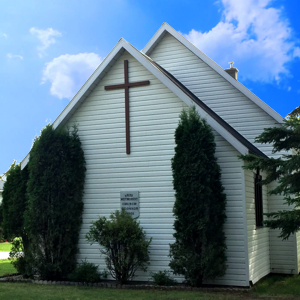 My Utmost For His Highest

Insight for Living by Chuck Swindoll

The history of the O’Connor Free Methodist Church is a story of courage and spiritual fervor of pioneers who blazed a trail and held the torch of life high for us to grasp and carry on.  The church has served this community for more than 100 years and today remains open and thriving.

Rev. J. W. Peach was young and inexperienced when he came to the Free Methodist congregation in 1909.  “We arrived via boat and train from Port Arthur,” he wrote.  “Our parsonage consisted of a pantry, small bedroom and living room.  The size of the building, 12 by 22 feet, built of green poplar, two inches thick and tar paper between inch lumber.  Though our shack was small and cold, our hearts were greatly warmed to find five bags of potatoes, a 10 pound bag of sugar and 100 pounds of flour with a large box of groceries.”

Organization for a congregation began in 1903 with the Pastor holding services in homes as well as in the Presbyterian Church in Hymers.  Most of the church and Sunday School services were held in Mr. Hannit’s house at the corner of what is now Earl and Sitch Roads.  Mr. Hannit crafted the pulpit which is still in the church today.  Rev. David Allan was superintendent for the district and wrote, “The country was new and everyone lived in shacks of log houses and the people were pioneering.  The Northern folk would drive to church in their wagons and buggies and stay all day.  They would gather at the parsonage and bring their baskets and cover the table with food.”

Rev. C. Fader became pastor in 1907 and it was during his ministry that the parsonage and church were built.  In fact, the Pastor skidded logs donated and sawn by congregation members. Enthusiasm was boundless.  Bees, a part of our pioneer heritage, were held often as busy men left their work undone so they could have a church building.  In December 1908, the church was ready with with an outstanding debt of only $67.65.

Membership decreases left the church without a pastor in 1984 and there was talk of closing.  Rev. Fred Hubert took on the challenge of being our Pastor and in 1987 the church received the Bishop’s Award as the fastest growing church in that year in the Conference.

Over the years, many physical changes took place and the church continued to grow.  In 1953, a basement was put under the original building as well as a closed in porch.  In 1976, we added the Christian Education wing and in 1992 our present parsonage was dedicated to the work of the kingdom.  Recently, a vision of a new, much needed sanctuary was seen by several.  Today we have a new sanctuary dedicated to the Glory of God.  We appreciate the work of Pastor Chris Fiorito and thank God for his ministry and leadership.  We give God the praise and glory for His goodness.